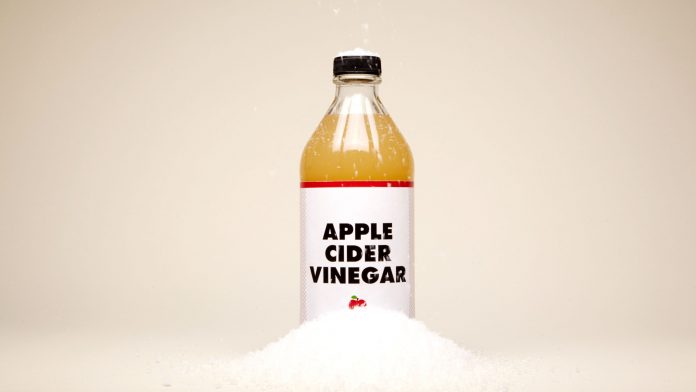 A great way to fight off oral thrush is using apple cider vinegar. It’s cheap and easily available, so you shouldn’t have any problem finding it – and it’s great against candida, too!

However, its taste may be a bit unpleasant, so you need to find a way to adjust to that. It may also be advisable to include other antifungals in your treatment, too, so that you’ll cure your infection more effectively.

Oral thrush, also known as pseudomembranous candidiasis, is the most common form of oral candidiasis (fungal infection caused by a fungus called candida albicans), accounting for 35% of all cases.

Regardless of the cause, this mycosis usually shows the same common symptoms: creamy white patches in the mouth, gums, tonsils and throat, swelling of the oral tissue and sometimes lesions of the mouth.

While most of the times these ugly patches are the only symptoms, occasionally more severe signs might appear, depending on how bad the infection is. A blistering sensation in the mouth, loss of taste, difficulty swallowing (if the infection is localized in the throat) and hoarseness (if the trachea and the larynx are infected) are all possible signs of oral thrush. Left untreated, the candida in the mouth may move to other regions of the body, leading to even worse conditions such as infections of the lungs or the intestines. However, such cases are rare and usually happen to those whose immune systems are weakened and who neglect the initial symptoms.

How does it work?

Apple cider vinegar contains enzymes that can control candida infection. It also restores the body’s pH level to fight the overgrowth of the infection-causing yeast. In addition, it boosts the immune system and gives you a strong defense against candida.

How do I take it?

What are the side effects?

If you don’t overtake it, apple cider vinegar should be safe for most people. However, ingesting too much may cause slow digestion, sore throats, tooth enamel damage, and high blood pressure.

There’s also some evidence which shows that, if you suffer from diabetes – which is always a possibility, if you’ve got oral thrush – apple cider vinegar may dangerously reduce blood sugar levels.

Apple cider vinegar is an effective antifungal. Taken as such or used to mouthwash, it will reduce the candida colonies in your mouth, thus speeding up the healing process.